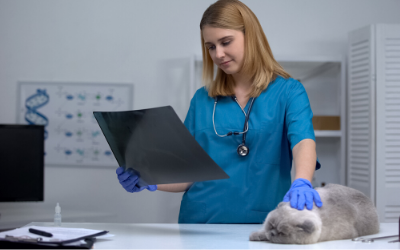 What are anticoagulant rodenticides?

Anticoagulant rodenticides are poisons used to kill mice, rats, and other rodents by preventing blood clotting. They are commonly found in hard bait blocks, soft baits (firm Play-Dough consistency), and pellets, but may also be in, powder, grain/meal, and liquid formulations. There are several different active ingredients that may be used in anticoagulant rodenticides including chlorophacinone, brodifacoum, bromadiolone, difenacoum, difethialone, diphacinone and warfarin. The active ingredient and bait formulation depends on the rodenticide's intended use and federal regulations.

What is anticoagulant rodenticide poisoning?

Anticoagulant rodenticide poisoning occurs when a cat ingests rodenticide. This usually occurs when the poison is placed in and around buildings without protective bait stations, allowing access to the poison by cats and other non-target animals. Poisoning after eating rodents killed by the rodenticide is called secondary or relay poisoning. This can occur but is rare because a cat would need to eat many rodents that died from the poison. Outdoor cats or cats living on farms/stables/vineyards that use rodenticides are at higher risk for secondary poisoning, especially if they subsist on a diet of rodents.

How does poisoning occur?

What are the clinical signs of anticoagulant rodenticide poisoning?

Initially, cats do not show signs of anticoagulant rodenticide poisoning. After ingesting this type of bait, it takes 1-2 days for vitamin K1 and clotting factors in the body to be used up. Next, it takes 3-7 days before signs of poisoning occur due to blood loss. Bleeding is not always obvious as it often occurs inside the abdomen, chest, lungs, joints, and gastrointestinal tract. In some cases, bleeding may be visible from the mouth, nose, or even ears.

"If bleeding occurs within the brain or spinal cord, cats may have neurologic signs."

Signs of internal bleeding may include weakness, depression, increased respiratory rate, difficulty breathing, coughing (which may produce blood), pale gums, lack of appetite, enlarged abdomen, vomiting, bloody or dark tarry stools, swelling or pain in the joints and bruising. If bleeding occurs within the brain or spinal cord, cats may have neurologic signs. If bleeding is not recognized and treated, death may occur.

If you suspect your pet ingested an anticoagulant rodenticide, it is important to contact your veterinarian or Pet Poison Helpline, a 24/7 animal poison control center, at 1-800-213-6680 right away to help determine the risk of poisoning to your pet.

How is anticoagulant rodenticide poisoning diagnosed?

Most cases of poisoning are diagnosed in pets that have signs of bleeding and a known or suspected exposure to anticoagulant rodenticides. Blood work to assess blood clotting times, red blood cells, and platelet counts are often performed. Radiographs (x-rays) and ultrasound may be used to check for blood in the chest or abdomen.

Measuring amounts of specific rodenticide active ingredients in the blood can be performed at a specialized veterinary diagnostic laboratory. Since the results may not be returned quickly, testing is uncommon. Treatment is often started without testing if poisoning is suspected.

How is anticoagulant rodenticide poisoning treated?

Early decontamination and treatment decrease the risk for serious toxicity. If an anticoagulant rodenticide ingestion occurred within a few hours of treatment, the veterinarian may induce vomiting. Inducing vomiting at home in cats should never be attempted because it may cause severe damage to the stomach lining. Once vomiting is controlled, activated charcoal may be administered to decrease absorption of the anticoagulant rodenticide by the gastrointestinal tract. Activated charcoal should only be administered by a veterinarian. Otherwise, aspiration into the lungs and life-threatening changes in blood sodium levels may occur.

The antidote to anticoagulant rodenticide is vitamin K1, a prescription drug. This can be given via injection or by mouth to increase the vitamin K1 levels in the body and prevent bleeding.

Depending upon the timing since ingestion and signs, hospitalized care may be needed. Fluids may be administered intravenously. Cats developing more serious signs may require intensive therapy as they have an increased risk for death. In addition to vitamin K1, blood or plasma transfusions, oxygen therapy, or removal of blood from the chest and/or abdominal cavity may be needed. Blood work to monitor blood clotting times, red blood cell and platelet counts are commonly performed.

What care will my cat require after treatment?

Pet Poison Helpline, an animal poison control center based out of Minneapolis, MN is available 24/7 for pet owners and veterinary professionals that require assistance treating a potentially poisoned pet. The staff provides treatment advice for poisoning cases of all species, including dogs, cats, birds, small mammals, large animals and exotic species. As the most cost-effective option for animal poison control care, Pet Poison Helpline’s fee per incident fee includes follow-up consultations for the duration of the poison case. Pet Poison Helpline is available in North America by calling 800-213-6680. Additional information can be found online at www.petpoisonhelpline.com

© Copyright 2021 LifeLearn Inc. Used and/or modified with permission under license.

View All
Ready to Make An Appointment? Call Now!