What is aortic thromboembolism? 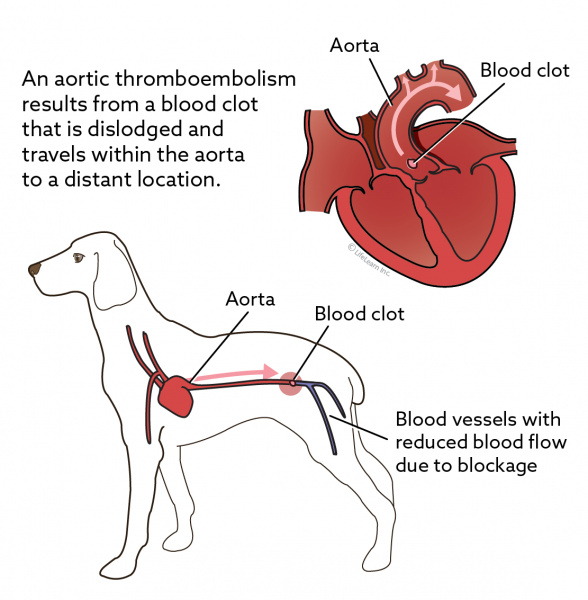 Aortic thromboembolism (ATE) is a potentially devastating condition. The aorta is the main artery of the body and carries oxygenated blood from the heart out to the rest of the body. The word thromboembolism combines the words thrombus and embolism. A thrombus is a blood clot that occurs inside a blood vessel, and the word embolism describes that the clot has traveled through a blood vessel to a location distant from where it formed.

An aortic thromboembolism results from a blood clot that is dislodged and travels within the aorta, becoming lodged in a distant location. This causes severely reduced blood flow to the tissues receiving blood from that particular part of the aorta, leading to decreased oxygen in the tissues.

How does this happen?

Aortic thromboembolism is a rare occurrence in dogs.

Aortic thromboembolism can be associated with several problems, such as endocarditis (inflammation of the valves of the heart), cancer, a body-wide generalized infection called sepsis, increased levels of the steroid hormones produced by the adrenal glands with Cushing’s Disease (also known as hyperadrenocorticism), and with increased protein-loss through diseased kidneys.

What are the signs of aortic thromboembolism?

Sudden paralysis and pain, usually in the rear legs, are the most common clinical signs of aortic thromboembolism, although weakness and lameness may be seen. If the rear limbs are affected, there may be decreased or absent pulses in the femoral arteries of the rear legs. The dog may also experience a lower-than-normal body temperature.

Is there any treatment for dogs with aortic thromboembolism?

Initially, dogs may need to be treated as inpatients, because they may have serious co-existent problems such as outlined above. They may also be experiencing considerable pain and distress.

Aspirin, and a similar drug called clopidogrel (brand name Plavix®), is theoretically beneficial during and after an episode of aortic thromboembolism, but should be used only under the direct supervision of your veterinarian. These drugs prevent platelets (blood cells that assist with blood clotting) from activating to clump together to form a clot while flowing through the blood vessels.

Likewise, another anti-clotting medication called warfarin (brand name Coumadin®) has been tried as a treatment. This particular medication, however, requires very careful monitoring of blood clotting measurements, and the drug itself often interacts with other medications.

Finally, the dog’s underlying disease(s) should be treated as is appropriate for the type and severity of the disease.

Is there any monitoring that should be done? What is the expected outlook?

Blood work should be monitored in order to manage the potential complications from anti-clotting therapies. As well, diagnostic imaging (such as ultrasound to look for clots in the aorta) may need to be performed or repeated.

"Blood work should be monitored in order to manage
the potential complications from anti-clotting therapies."

The expected course of this disorder is days to weeks for full recovery, but the prognosis in general is poor. Long-term survival time varies between one month to several years with, the average being approximately a few months with treatment.

© Copyright 2021 LifeLearn Inc. Used and/or modified with permission under license.

View All
Ready to Make An Appointment? Call Now!